Donald Trump Is Evil > About Us 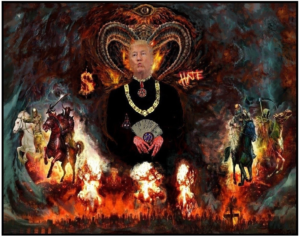 This site is operated by a group of individuals dedicated to bringing you the truth about Donald Trump.  We know that by definition he is evil and needs to be stopped!  We care about our country enough to take action and bring to you vetted information.

Donald Trump hopes to DIVIDE our country.  This is the exact opposite of the concept of e pluribus Unum, which is the motto of our country and means “out of many, one.”

For those who consider themselves to be Christians, even the bible warns against such behavior:  “Sowers of Discord” sow the seeds of bitterness, anger, distrust, and hatred into the ground of other people’s hearts.  These actions do not come from the Spirit of God.  Such divisive behavior is included in what the bible calls “the works of the flesh.”

By definition, a “good person” is good to others.  A good person acts with compassion and empathy towards others.  Such a person sees beyond superficial differences such as race, gender, sexual orientation, social status, and nationality.  Truly good people relate to the common human essence that is within us all.

Donald Trump is not a savior.  He is a hot tempered entertainer with a whole lot of money.  He is a man who lacks compassion and humility.

In an article written by Steve Taylor Ph.D. for Psychology Today, evil people are defined as follows:

‘Evil’ people are those who are unable to empathise with others. As a result, their own needs and desires are of paramount importance. They are selfish, self-absorbed and narcissistic. In fact, other people only have value for them to the extent that they can help them satisfy their own desires, or to which they can exploit them. This applies to dictators like Stalin and Hitler, and to serial killers and rapists. I would argue that their primary characteristics is an inability to empathise with others. They can’t sense other people’s emotions or their suffering, can’t see the world from other people’s perspective, and so have no sense of their rights. Other human beings are just objects to them, which is what makes their brutality and cruelty possible.

Throughout his lengthy public history, Trump has consistently objectified women, made openly bigoted statements, mocked people with physical disabilities.  Since the beginning of his campaign for the presidency, he has twisted a large segment of the Republican party into believing unsubstantiated and dangerously divisive political views as facts, while making himself out to be the one and only solutions to all the world’s problems.

Donald Trump has been involved in about 3,500 lawsuits.  Over 70 new lawsuits have been filed against him and his companies in the past year alone.  There are at least 50 remaining open civil lawsuits.  Trump University is even currently being sued for fraudulent and misleading behavior.

Donald Trump’s inherited wealth and power have enabled him to continue with utter disregard for the effect of his actions on those whose lives have suffered by his actions.  This is an evil petty man without a conscience.  His erratic and unconscionable behavior is not only well known, but well documented.  Allowing this narcissistic megalomaniac unfettered access to the highest office of our government would have devastating affects not only on our country but on the world in general.

It is not only our goal, but our duty to stop him.