Trump floats delaying election despite lack of authority to do so 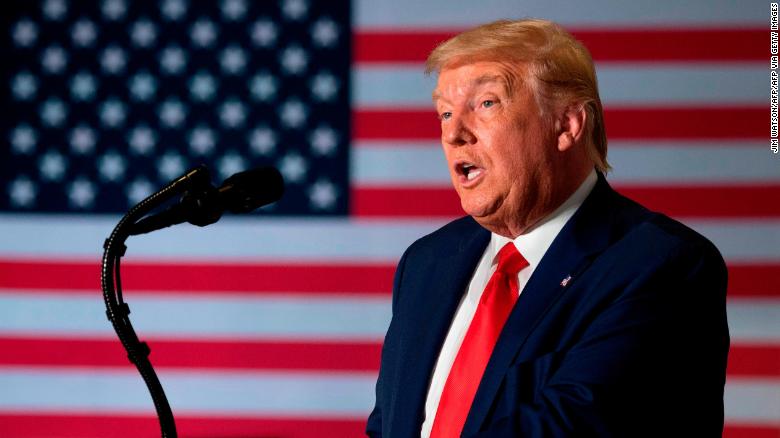 (CNN)President Donald Trump explicitly floated delaying November’s presidential election on Thursday, lending extraordinary voice to persistent concerns that he will seek to circumvent voting in a contest where he currently trails his opponent by double digits.

Hours later, Trump seemed to acknowledge the move was meant primarily to inject uncertainty into an election he appears determined to undermine, though didn’t entirely back away from the notion of a delay.
Trump has no authority to delay an election, and the Constitution gives Congress the power to set the date for voting. Lawmakers from both parties said almost immediately there was no likelihood the election would be delayed and even some of Trump’s allies said his message reflected the desperate flailing of a badly losing candidate.
Yet as toothless as it was, Trump’s message did provide an opening — long feared by Democrats — that both he and his supporters might refuse to accept the presidential results. In questioning it ahead of time, Trump is priming those in his camp to doubt the legitimacy of whatever outcome emerges in the first weeks of November.
In his tweet on Thursday morning — coming 96 days before the election and minutes after the federal government reported the worst economic contraction in recorded history — Trump offered the suggestion because he claimed without evidence the contest will be flawed.
“With Universal Mail-In Voting (not Absentee Voting, which is good), 2020 will be the most INACCURATE & FRAUDULENT Election in history. It will be a great embarrassment to the USA,” he wrote. “Delay the Election until people can properly, securely and safely vote???”
During a late-afternoon news conference, Trump was asked to explain his motivations. At first, he suggested he was trying to avoid a drawn-out counting process that might stretch for days or weeks if large numbers of voters cast ballots by mail.
But he eventually acknowledged the real impact of his message: sowing doubts early in whatever outcome emerges in November.
“What people are now looking at is … are all these stories right about the fact that these elections will be fraudulent, they’ll be fixed, rigged,” he said.
“Everyone is looking at it,” Trump added. “A lot of people are saying that probably will happen.”
There is no evidence that mail-in voting leads to fraud. American elections have proceeded during wars and depressions without delay. The general election has been fixed on the first Tuesday after the first Monday in November since 1845.
Trump has previously sought to stoke fear and lay the groundwork to question the election’s results by promoting the idea that mail-in voting leads to widespread fraud and a “rigged” election. Democrats have warned his efforts are meant both to suppress voting and to provide a reason to refuse to leave office should he lose.
Trump’s representatives had previously scoffed at Democratic suggestions he would attempt to delay the election, claiming they were unfounded conspiracies. His tweet on Thursday marks the first time Trump has openly raised the idea of moving the date of voting.
On Thursday, Trump’s campaign said the President was offering a query.
“The President is just raising a question about the chaos Democrats have created with their insistence on all mail-in voting,” campaign spokesman Hogan Gidley said. “They are using coronavirus as their means to try to institute universal mail-in voting, which means sending every registered voter a ballot whether they asked for one or not.” 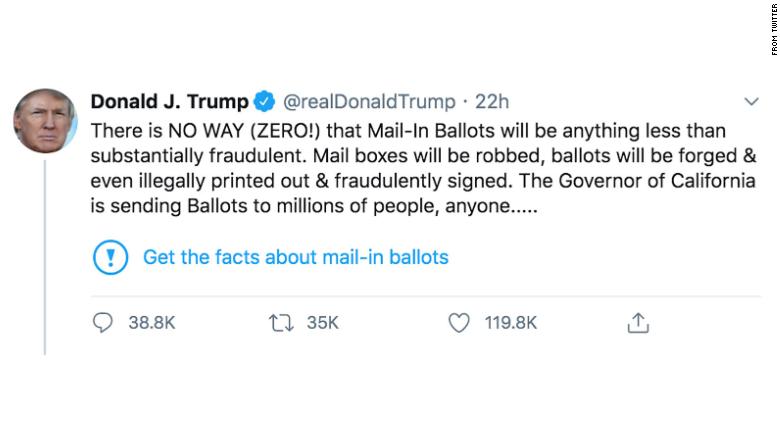 Fact-checking Trump’s recent claims that mail-in voting is rife with fraud
His tweet comes as a spate of recent polling in battleground states — and even states he won handily in 2016 — show him trailing or virtually tied with former Vice President Joe Biden, and widespread disapproval of his handling of the pandemic.
While Trump has encouraged states to lift restrictions on businesses and said schools must reopen for in-person learning in the fall, his suggestion Thursday that the election might be delayed because of the pandemic undermines his efforts to act like the virus is under control.
A once-hot economy that Trump hoped to use as his central reelection argument has turned cold. Numbers out Thursday showed the US economy contracted at a 32.9% annual rate from April through June, its worst drop on record.
Trump has turned instead to stoking racial divisions and appealing to white voters as he works to consolidate support among the constituencies he won in 2016. And he has taken steps to undermine the election results in ways that reflect an extraordinary break in tradition.
Asked during an interview with Fox News’ Chris Wallace last week whether he would accept the results of the election, Trump refused.
“No, I’m not going to just say ‘yes.’ I’m not going to say ‘no,’ and I didn’t last time, either,” he said.
Asked about the issue in a House Judiciary Committee hearing Tuesday, Attorney General William Barr said he had “no reason to think” that the upcoming election will be “rigged.” But he did say he believes that “if you have wholesale mail-in voting, it substantially increases the risk of fraud.”
But historically, voting by mail has not led to massive voter fraud. And nonpartisan election experts say the possibility of foreign entities printing millions of fraudulent mail-in ballots this November is highly unlikely.
The President does not have the power to change the date of the election. Election Day is set by congressional statute, and most experts agree that it cannot be changed without congressional approval.
Responding Thursday, both Republicans and Democrats said Trump’s suggestion was a non-starter.
“I don’t think that’s a particularly good idea,” said Sen. Lindsey Graham, a top ally of the President’s.
“I think that’s probably a statement that gets some press attention, but I doubt it gets any serious traction,” said Sen. John Thune, the Senate Republican whip.
House Speaker Nancy Pelosi simply replied to Trump’s tweet quoting the passage in the Constitution that gives Congress the authority to set the date of elections.
Biden has previously raised the possibility of Trump attempting to delay the election.
“Mark my words: I think he is gonna try to kick back the election somehow, come up with some rationale why it can’t be held,” Biden said at a virtual fundraiser in April, according to a pool report.
At the time, a spokesman for Trump said the claim amounted to “incoherent, conspiracy theory ramblings of a lost candidate who is out of touch with reality.”