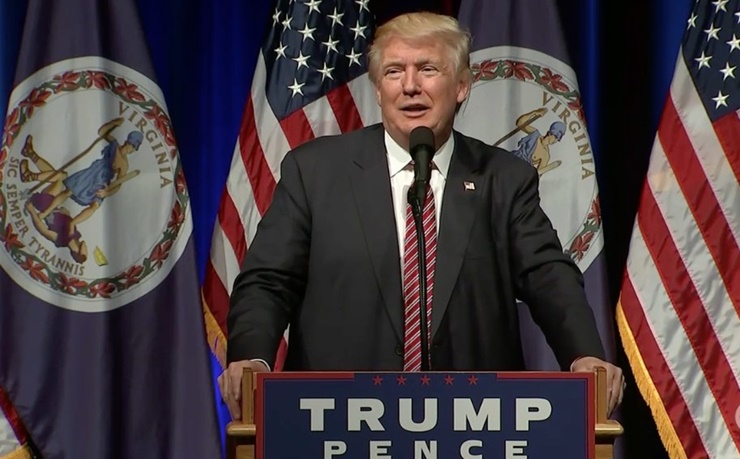 Karen Bass and Donald Trump are the reasons why the hashtag #DiagnoseTrump has been trending on social media.

Amidst rumors that many top GOP members are frustrated with Trump due to his feud with a gold star family and because of his erratic behavior, the Democratic congresswoman has decided to question the mogul’s mental health openly.

Rep. Bass (D-Los Angeles) has started a petition where she is asking for Trump to undergo a psychiatric evaluation. According to Bass, many of the billionaires’ action make her believe that he might be suffering from a Narcissistic Personality Disorder and is, therefore, unfit to be president. The petition filed on Change.org read in part:

Donald Trump is dangerous for our country. His impulsiveness and lack of control over his own emotions are of concern. It is our patriotic duty to raise the question of his mental stability to be the commander in chief and leader of the free world. Mr. Trump appears to exhibit all the symptoms of the mental disorder Narcissistic Personality Disorder (NPD). Mental health professionals need to come forward and urge the Republican party to insist that their nominee has an evaluation to determine his mental fitness for the job. It is entirely possible that some individuals with NPD can successfully function in many careers, but not the Presidency of the United States. We deserve to have the greatest understanding of Mr. Trump’s mental health status before we head to the polls on November 8th, 2016. #DiagnoseTrump

So far in his campaign for President of the United States, Donald Trump has unabashedly exploited fears for political gain. His trolling-tweets alone have helped damage our country’s relationship with foreign allies – threatening our national security. His divisiveness has only served to make us less safe. 6,000 lawsuit and one failed Trump University later, we have seen his ruthless business practices on full display, ripping off thousands of hard working Americans – without remorse – to put an extra dollar in his pocket. #DiagnoseTrump

The American Psychiatrist Association has declared it unethical for psychiatrists and psychologists to “comment on an individual’s mental state without examining him personally and having the patient’s consent to make such comments.” I call on mental health professionals to publicly urge the Republican party to conduct an evaluation of Mr. Trump and officially determine if he is mentally fit to lead the free world. #DiagnoseTrump

Mr. Trump appears unable to control his compulsion and displays characteristics of all nine criteria to officially diagnose an individual with Narcissistic Personality Disorder. #DiagnoseTrump

If you believe Trump has publicly displayed characteristics of the nine criterion below, please sign this petition as a call to action to #DiagnoseTrump.

Bass also started the hashtag #DiagnoseTrump to promote her efforts and thus far more than 7000 people have signed the petition. Believe it or not, Trump has not yet responded to Bass.

That’s the question being asked in recent days by prominent columnists, both liberal and conservative, about the Republican presidential nominee.

“During the primary season, as Donald Trump’s bizarre outbursts helped him crush the competition, I thought he was being crazy like a fox,” Eugene Robinson wrote in an op-ed (“Is Donald Trump just plain crazy?”) published Tuesday in the Washington Post.

“Now I am increasingly convinced that he’s just plain crazy,” Robinson continued. “I’m serious about that. Leave aside for the moment Trump’s policies, which in my opinion range from the unconstitutional to the un-American to the potentially catastrophic. At this point, it would be irresponsible to ignore the fact that Trump’s grasp on reality appears to be tenuous at best.”

Robinson was not the only newspaper writer to recently ask such a blunt question about Trump’s fitness for office.

“One wonders if Republican leaders have begun to realize that they may have hitched their fate and the fate of their party to a man with a disordered personality,” Robert Kagan, a senior fellow at the Brookings Institution, wrote in a separate Washington Post editorial on Monday. “We can leave it to the professionals to determine exactly what to call it. Suffice to say that Donald Trump’s response to the assorted speakers at the Democratic National Convention has not been rational.”

“Have we stopped to appreciate how crazy Donald Trump has gotten recently?” Klein asked.

“There was no reason for Trump to say any of this,” Klein wrote. “Trump had just accepted the Republican Party’s nomination for president. Cruz had been vanquished, booed off the stage. Trump’s opponent, now, was Hillary Clinton. But he couldn’t help himself. He couldn’t stay on message, he couldn’t suppress the crazy, for 24 hours.”

“I almost don’t blame Trump,” David Brooks wrote in the New York Times on July 29. “He is a morally untethered, spiritually vacuous man who appears haunted by multiple personality disorders. It is the ‘sane’ and ‘reasonable’ Republicans who deserve the shame.”

Bloomberg uses billionaire status to bash Trump at the DNC

“Donald initially — I really hoped he would be something different, that as a businessperson, I thought there was an opportunity there,” Cuban told CNN while campaigning with Clinton in his hometown of Pittsburgh on Saturday. “But then he went off the reservation and went bats*** crazy.”

“We can gloss over it, laugh about it, analyze it,” Stuart Stevens, chief strategist to Mitt Romney’s 2012 campaign, wrote on Twitter. “But Donald Trump is not a well man.”

Trump biographer Michael D’Antonio, though, argues that Trump is not crazy but instead “sees the world as a constant struggle for victory and lacks a moral compass.”

“The word ‘crazy’ conjures up a person who is so plagued by delusions, or perhaps hallucinations, that he makes no sense at all,” D’Antonio wrote in an op-ed for CNN.com. “Consider his success, both before and during his pursuit of the presidency, and it’s hard to argue that Trump suffers from such a profoundly distorted view of reality. In fact he has long demonstrated a keen awareness of how our society worships celebrity and rewards those who can attract the limelight and hold its focus.”

How to Determine if Someone Is a Sociopath

In the mental health field, sociopathy is also known as antisocial personality disorder, a condition that prevents people from adapting to the ethical and behavioral standards of his or her community. Sociopathic individuals can be dangerous, exhibiting criminal behavior, organizing dangerous cults, and causing harm to themselves and others. There are several signs that someone may be a sociopath, including showing a lack of remorse, having a disregard for the law, and frequently telling lies.

Sociopaths are usually extremely charming and charismatic. Their personalities are described as magnetic, and as such, they generate a lot of attention and praise from others. They also tend to have a strong sexual energy, and may have strange sexual fetishes or be sex addicts.

Sociopaths oftentimes feel overly entitled to certain positions, people, and things. They believe that their own beliefs and opinions are the absolute authority, and disregard the opinions of others.

Sociopaths are rarely shy, insecure, or at a loss for words. They have trouble suppressing emotional responses like anger, impatience, or annoyance, and constantly lash out at others and respond hastily to these emotions.

Sociopaths exhibit abnormally spontaneous and daring behavior. They seem to act outside of the realm of social norms, and may do bizarre, risky, or outrageous things without assessing the potential repercussions.

Sociopaths can be criminals. Because of their tendency to disregard the law and social norms, sociopaths may have a criminal record. They may be con artists, kleptomaniacs, or even murderers.

Sociopaths are professional liars. They fabricate stories and make outlandish, untruthful statements, but are able to make these lies sound convincing with their confidence and assertiveness.

Sociopaths have a low tolerance for boredom. They get bored easily and require constant stimulation.

The way that a person interacts with others may also be an indicator that that person is a sociopath. Sociopaths are very good at convincing others to do what they want, either through charm or other more aggressive means. As a result, friends and coworkers of a sociopath may find themselves doing whatever the person wants them to do.

Sociopaths are incapable of experiencing guilt or shame for their actions. It is common for sociopaths to lack remorse when they have done something that hurts others. They may appear indifferent or rationalize their actions.

Sociopaths are manipulative. They may try to influence and dominate the people around them and tend to seek positions of leadership.

Sociopaths lack empathy and may be incapable of love. While some sociopaths will have an individual or a small group of people that they seem to care about, they have a hard time feeling emotions and it is likely that they have not had healthy romantic relationships in the past.

Sociopaths have a hard time dealing with criticism. They often desire approval from others and may even feel like they are entitled to it.

6 Subtle Characteristics of The Pathological Liar

Some diagnoses that might include pathological lying includes but is not limited to:

Certain personality traits where pathological lying may occur include: