Hold on to your rights…they define you as an American 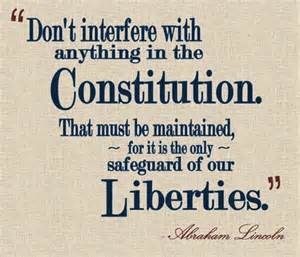 In the early 1950’s, the Civil Rights Movement began to grow. Since then, NO presidential candidate has ever threatened it nor any other basic rights that Americans have enjoyed.

Chief Justice Earl Warren joined the Supreme Court shortly before it began hearing new arguments in the case: Brown v. Board of Education of Topeka. It was argued on December 9, 1952, and decided on May 17, 1954.

Warren knew that the decision would be highly politically controversial. In order to diminish resistance to the validity of the decision, Warren worked diligently to insure that a unanimous decision was reached.

Warren assigned the job of writing the opinion to himself, and then systematically met with each of his eight colleagues separately and listened to their views in order to construct a decision upon which they could all agree. Once Warren had finally brought the last holdout, Justice Stanley Reed, on board, he drafted the ruling.

The key part of the ruling stated: “We cannot turn the clock back. We must consider public education in the light of its full development and its present place in American life throughout the Nation. Only in this way can it be determined if segregation in public schools deprives these plaintiffs of the equal protection of the laws.”

Warren believed that the nation needed to see the Supreme Court united on this potentially explosive issue.

Like Brown v. Board of Education of Topeka, this election marks a landmark decision on the part of our nation validating the basic concepts that we Americans have taken for granted for well over 2 centuries.

Nothing short of a unanimous sweep against Trump will be enough to send a clear and concise message that the divisive politics of Trump will NEVER be tolerated!

Here is a partial list of the Constitutional rights that a Trump Presidency would threaten:

1st Amendment – “Congress shall make no law respecting an establishment of religion, or prohibiting the free exercise thereof; or abridging the freedom of speech, or of the press; or the right of the people peaceably to assemble, and to petition the Government for a redress of grievances.

8th Amendment – “Excessive bail shall not be required, nor excessive fines imposed, nor cruel and unusual punishments inflicted”

Under President Trump, torture to include but not limited to waterboarding, will be common.

10th Amendment – “The powers not delegated to the United States by the Constitution, nor prohibited by it to the States, are reserved to the States respectively, or to the people.”

Under President Trump, it would be “The powers not delegated to the United States by the Constitution, nor prohibited by it to the States, are reserved to President Donald Trump”.

During a rally in Mobile, Alabama, on Aug. 21, Trump reiterated his support for doing away with the birthright citizenship provision in the 14th Amendment — which grants citizenship to babies born in the U.S. even if their parent or parents are in the country illegally.

Send Trump a message and let him know that his brand of politics was finished by the end of 1945, and we don’t need or want a petty narcissistic dictator to rule over us!